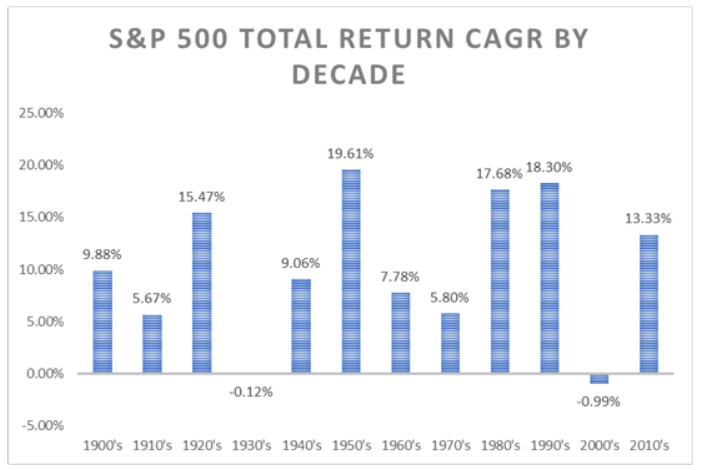 Recently I’ve been listening to various financial analysts talk about what the previous decades average returns mean for the next decade. Questions like:  Where are we on valuations? What will earnings do? Where do the 2010’s as a decade rank in comparison to past decades with total returns (including dividends)?

Cutting right to the chase, above you’ll notice a quick summary I created based on a few data sets and estimating +30% total return for 2019.  The compounded annualized growth rate or CAGR above is what an investor would have realized assuming no deposits or withdrawals during this period. CAGR is different from a simple average. The best way to illustrate the difference is say someone has a down negative 50% year followed by a 50% positive year. The simple average is 0% but the CAGR is about negative -13.4% annualized growth rate. Simple math tells you they would still be down 25% and when you annualize it, the result is the -13.4%

This graph should immediately illicit a few thoughts. First, the 2010’s did not provide a historically high annualized rate of return coming in 5th out of the 12 results. Also, only two decades had a negative annualized CAGR. Both slightly negative. Neither decade hurt investors with big losses. Instead you could look at it like a lost decade or lost opportunity resulting in wasted time in the markets.

So, beyond some of the points mentioned, visually this just provides a nice way to look at historical decades. One final thought, it has only been since the mid to late seventies that Vanguard first offered an S&P 500 Index fund. Prior to that investors might have needed to buy the individual shares weighted correctly to match the index. While late last year commissions when to zero, the trading costs would have been high to build that. Not to mention the bid/ask spreads or availability and cost of reinvesting dividends. The point being it wasn’t feasible for an average investor to create a portfolio to even get those returns in the bar chart.

Now, commissions are zero and many low-cost index exchange traded funds allow investors to own the entire S&P 500. Even better, you can get a version of the S&P 500 index through ZEGA’s buffered or hedged strategies.

Historically, the markets since 1900 have enjoyed 10 out of 12 positive compounded annualized total returns. We do not have a crystal ball to tell you what the 2020’s will end up returning, but we can help you manage risk of a lost decade.