Recently interest rates, or rather the move higher in both the 10-year treasury and 5-year treasury have captivated the financial news media. Someone recently asked me how the stock market has done during these periods of rising rates. Thankfully, I did not have to pull the data as I caught this graph from Morgan Stanley that summarized for us.

You can click on the graph to enlarge it to get a better view, but essentially all but 3 periods listed were in red numbers. The rest were green. This even included the period from the end of 1976 to late 1981 when the 10-year treasury yield jumped a whopping 900 basis points or 9 full percentage points. Above they list the column as change in 10-year yield as how much extra interest was added on to the beginning period. So, if rates were 0.6% and went to 1.6%, then they would list as 1%. By the way, that is what they have for the most recent period.

Without getting too much in the weeds on this, generally the theory is that if rates are going higher, it is because the economy is also growing. Historically the Fed has risen rates to cool off the economy. So, no predictions this time around but just a look back that tells us rising rates has not caused significant downside in markets.

The other side of this is that we had stagflation (rising rates, GDP slowing, high unemployment) at different periods from 1965 – 1985 which would seem to be antithetical to the stock market.

If ZEGA allotted me 100 pages for our blogs, I could delve deep into this period and some of the surprising assumptions that may or may not be wrong or right about the period. But alas I must settle for our normal length. Just for reference, below is a graph that shows the annual change in the CPI Index.  And as we see in the initial graph, markets went up over various periods contained below. 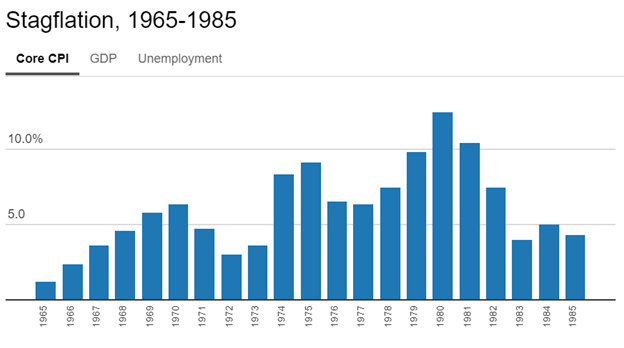 Now of course high inflation has any number of problems. As inflation subsided it kicked off the 1982 – 2000 historic bull market in stocks. I just wanted to put a few things in front of you to help with some perspective on the whole “rising rates” we seem to be fixated on.

No predictions either going forward as to what will happen should rates rise dramatically from here. While this time is never different, sometimes it is and there are scenarios that might see the opposite effect. Rates have never been as low as we have seen them over the past year. Yet, as we always say, Buy but Hedge! If your portfolio is hedged, you have already built-in protection against what you fear.