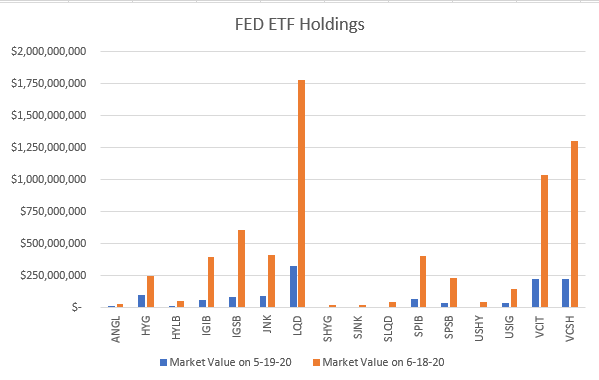 In addition to the announced main street lending program, the lowering of the fed funds rate back to zero, buying of commercial paper, and now many other things, the Federal Reserve also announced they would begin buying corporate bonds and exchange traded funds holding debt. As you can see by the chart above, they have been active in their buying, even more so on this last month’s release.

Recently the Fed gave us a glimpse behind the curtain of what they have been buying. Included in the lot was everything from corporate bond investment grade ETFs and even high yield bond ETFs.

While they have not released any additional details of further buying, on the Federal Reserve’s website, if you scroll down under the reports to congress you’ll see the SMCCF (Secondary Market Corporate Credit Facility) where you can download a spread sheet showing the trades and holdings.

In the graph below is a list through June 18th:

Many pundits making the rounds on CNBC and Fox Business seemed a bit surprised that they decided to get into the junk bond arena. Keep in mind, some debt in that space started out as lower investment grade but later were re-rated to junk. These bonds are commonly referred to as the “Fallen Angels”. A company like Ford Motor would qualify under that space.

What this did in the near term was created a bit of a floor in those bond markets. Like when large foreign central banks do currency interventions, perhaps this also caused aggressive short sellers to think twice about fighting the Fed.

In a Wall Street Journal piece, quoted below, it was pointed out that through May 19th, they only had bought $1.3 Billion in bond ETFs. We now know as of June 18th that total is north of $6.8 billion. Yet, they (The Fed) has said it would purchase much more including individual corporate bonds as outlined in a release on June 15th.

We know that the balance sheet of the Fed has expanded to record levels. Often through the years traders and managers have coined the phrase “Don’t Fight the Fed”. All that means is those with the view to trade with the Fed would position themselves to match what the Federal Reserve is doing from a monetary policy standpoint. At ZEGA we utilize short duration high yield exchange traded funds within strategies like ZBIG and Buy and Hedge Retirement. Primarily as a funding source to lessen the cost to synthetically long stock exposure. In theory, as we own what the Fed is buying, portfolios like this we are currently aligned with the Fed.

To be clear, this does not mean the various bond ETFs are void of market risk. Other factors can impact those funds. Spreads between high yield and treasuries could widen again. But much like the so-called Bernanke put of the financial crash in 2008, the Fed buying assets in the same space is more positive than negative. One thing that could cause a change in direction in their policies would be if we were to see a material uptick in inflation.

While this type of activity in the US is probably new and surprising to many of you, a quick google search on the Japanese Central Bank and open market purchases of equities and fixed income will give you a nice history lesson as they’ve been conducting open market purchases as outlined in this Bloomberg article.